KTD Math will be working on problem solving using logic.  I have two problems for the class to complete as a group.  One where we need to determine the snack eaten by a class with only 3 clues, and another problem about where five kids are in their line using a chart and four clues.

KTD Literature will be working on developing rhyming words using scrabble tiles.  My plan is to turn this into a race between two groups to see who can come up with the most rhyming words for a variety of sounds in only three minute intervals.

2TD is finally done with their amazing renditions of A Giraffe and a Half.  The kids did a great job of working together on this book.  Our next adventure will be with the novel Frindle by Andrew Clements.  We will be reading this book together and recording how different characters change in a variety of categories.

3PA will spend the week creating a plan based on The Girl Who Owned a City of where they would relocate in Brookdale to create their own city.  The kids will also be creating a visual to show the connections between this novel and The Green Book.

4PA will create their impressionist watercolor paintings of The Secret Garden in three stages of development.  Some of the symbolism and metaphors found in the text will also find their way into the paintings.  This should be a fun week for the 4th graders.

5PA is finishing up reading two award winning novels written in verse, The Crossover and Brown Girl Dreaming.  Teams were given the four standards 5PA uses 2nd quarter for understanding literature.  The only directions they were given was to show their mastery of the standards in some way.  It can literally be anything they think of, a challenge.  This week, groups will be developing their way of showing mastery of the following standards:


RL.6.2:  Determine a theme or central idea of a text and how it is conveyed through particular details; provide a summary of the text distinct from personal opinions or judgments.


RL.6.3:  Describe how a particular story's or drama's plot unfolds in a series of episodes as well as how the characters respond or change as the plot moves toward a resolution.


RL.6.4:  Determine the meaning of words and phrases as they are used in a text, including figurative and connotative meanings; analyze the impact of a specific word choice on meaning and tone.


RL.6.5:  Analyze how a particular sentence, chapter, scene, or stanza fits into the overall structure of a text and contributes to the development of the theme, setting, or plot.

On Wednesday, we will have our first Socratic Seminar Tug-o-War comparing Ray Bradbury to all other writers to develop our understanding of how text structure impacts themes in literature.

KTD Lit  will be exploring the picture book The Barnubus Project by The Fan Brothers. The story is about rejected pets from a peculiar pet... 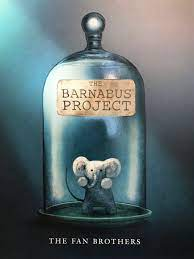